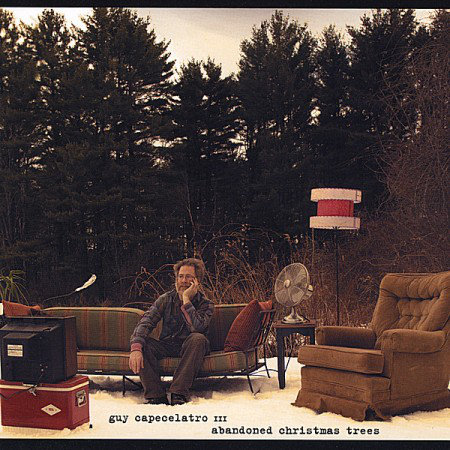 Available at cdbaby or or iTunes. A couple times a year, my dear friend Guy (one of the most prolific writers in the history of man-kind) writes to ask if I’ll jump into a project he’s working on – and I really mean ‘jump’. I often have only a couple of days to work on the project, which is actually a total blast for me and very freeing. This is one of those projects. Along with a whole bunch of Guy’s talented friends, you’ll find me nestled in on track 13 ‘Translations’. I’m honored to be on the record and was especially excited because this was my very first time singing after finishing a nasty little fight with throat cancer. Shaky? Sure! But still there. 😉 Thanks guy. I heart you.

Guy Capecelatro III is as much a storyteller and poet as he is a singer-songwriter. From the opening narrative of “Abandoned Christmas Trees,” in which he describes a girl named Christina knitting a scarf while riding on a train, the album stews with nostalgia, longing and poetic contemplation. Capecelatro cast his net across the Seacoast to pull in a huge range of singers and instrumentalists, each of whom becomes another character in the album’s set of musical short stories. Many of the songs are endowed with the type of sulking melancholy that characterizes much of the Seacoast’s modern folk scene. But Capecelatro inserts enough musical variety to keep the disc thoroughly engaging throughout all 16 of its tracks, balancing slower tunes with upbeat numbers and indie rock sounds. The lyrical content also varies widely, with peaceful sentiments counterbalanced by morose and sometimes violent imagery. “You didn’t seem to bother / when I hit your father / I think you’d have to admit / that he deserved it,” Capecelatro sings in “So Fine.” Contributing to the album’s strength is its instrumental diversity. Each song features a different lineup, with Capecelatro serving as the only constant. The full cast of musicians is too lengthy to list, but a few notable contributions come from Mara Flynn on vocals, Nate Groth on vibes, Juliet Nelson on cello, Nat Baldwin on bass and Gregg Porter on drums. Capecelatro’s former Unbunny band mate Jarid del Deo makes a guest appearance on guitar, and there’s even some eerie saw playing by Shon Mahoney on the closing track, “Say Goodnight.” “Abandoned Christmas Trees” was recorded at Imaginary Cat by Marc McElroy, who also plays several instruments on the disc. Visit www.myspace.com/twotonsanta. -Matt Kanner The Wire